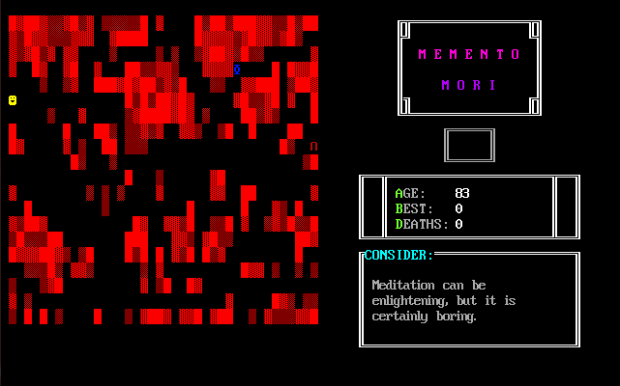 I’m pleased to announce the release of my first-ever video game, Memento Mori.  You can play it right here.

By virtue of writing But Our Princess, I played a lot of video games and read plenty of books and articles about them.  And I teach an annual course about the culture and theory of video games, so I guess I get paid for thinking and talking about them, too.  But analyzing and playing others’ games is very different from creating one of your own.

Since I was young, I always thought it’d be cool to make my own games.  I knew how to do some programming in BASIC, but how to create a complete game experience was beyond me.  So I grew out of programming, and forgot about the possibilities until very recently.  Unfortunately, my programming knowledge remained stuck in the 1980s–BASIC and a bit of Pascal.  I certainly wasn’t going to learn something new just to throw what would likely be a dinky game together.  Fortunately, since I last set about trying to program a game (from what I remember, a maze game strangely reminiscent of Memento Mori), there have been a lot of game creation tools made that target people just like me.

I used Stencyl.  It claims to allow you to make games without knowing code, which is technically true.  Instead of typing in code, you snap together preconfigured blocks.  But you still need to know and understand computer logic, such as if-then statements and loops.  Fortunately, BASIC served me well for that.  It’s intimidating to start a blank project, but once I got some of the basics down, the game progressed well.  Stencyl was a great tool for me to build a Flash game with zero knowledge of ActionScript.

I had no idea how to create a random maze.  The irony is that I actually wrote a BASIC program to first test that I understood what was going on.  The maze was created via an algorithm charmingly named the Drunkard’s Walk.  The below screenshot is from that BASIC program, and the maze looks remarkably similar to the final product. 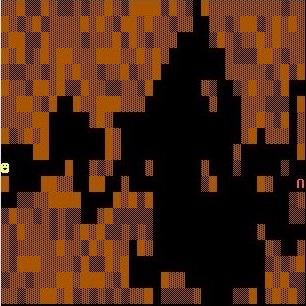 But just building a little maze game didn’t seem worthwhile.  I’ve been very interested in the rise of art games–video games that purport to do something other than “merely” entertain.  (The linked Wikipedia article has a huge list at the bottom, but the archetypal example is Passage.)  Since there’s no way to win Memento Mori–the enemies get progressively nastier, until they will literally break down walls at the end to destroy you–a theme of death seemed appropriate.  I’ve also always been intrigued by simplistic aphorisms for ways to live (“Live each day to its fullest!” et al.), so I figured they might be a nice counterpoint in a game where the only outcome is death.  I culled many from online, then wrote a bunch more of my own, often with dubious or impractical advice.  When I was testing the game, I frequently caught myself mentally arguing with an aphorism that I myself had written expressly as bad counsel.

The brief description I wrote is “A game about affirmations, mazes, ASCII graphics, and death. Mostly death.”  And that seems about right.  I’m pretty pleased with how things turned out, and happy to have finally achieved my goal of making a game:  I figured out the programming to make a maze and five different types of enemy behavior, I wrote the little square-wave soundtrack in A minor, and I figured out how to make 2014 technology look and behave like 1984 technology (which was more challenging at times than I had hoped it would be).  And now you can play the game on Kongregate (again, right here!), alongside a bunch of other games by people who know far more about what they’re doing.

So give it a try!  What better way than to live today to its fullest?